Toybob are small cats, no bigger than a 3-6 month old kitten of a normally developed domestic cat, with a short strong and muscular body, short bobbed tail consisting of several kinked vertebras. Toybobs are very affectionate and obedient to their human companions with an even temperament. Despite its small size, they are also very active, playful and agile. 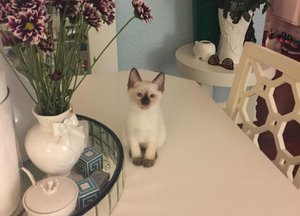 The first recorded references to the Toybob breed dates back to early 2000, when the first breeders from the Ural region of Russia became interested in this type of small native cat. Their attention first drawn to unusually small cats found within Natalya Fedyaeva's “Si-Savat” cattery, and later the “Little Angel” cattery. Also added to the creation of one early Toybob line, were two cats similar in type, a male named ”Gabriel” and his female littermate “Glafira”. These two cats of comparable phenotype were acquired from a breeder in the Rostov area of Russia who was breeding their own small cats going by the name “Skif-Thai-Toy-Don”.

Small cats like the Toybob were known to be commonly found on the streets of the Ural region of Russia. Several breeders in the Ural region decided to work together simultaneously, adding more cats they found in the region to the Toybob’s development. Occasionally, outcrossing to other domestic Russian cats of similar phenotype and sparingly adding other breeds. Two native cats important to the breed’s early formation, were “Masya” and “Serafima”. Like many of the small native cats commonly found in the Ural, they perfectly embodied the Toybob’s small size, bobbed tails and were pointed. Surprisingly, they were very gentle and rather friendly. Traits still in the breed. Despite being small in size, the Ural native cats demonstrated to have great health and hardiness. For this reason, breeders preferred to go back to these native cats in order to create additional foundation lines for the breed.

The first club to have engaged in the Scyth-Toy-Bob was a club registered with the WCF (World Cat Federation) “Just a Cat", the head of which to this day is WCF expert Irina Matyushina. In 2009, the breed’s first draft standard was adopted. It included the Scyth prefix can be dropped and simply use Toybob. In 2014 it was decided the breed transcript would be Toybob “TBS- Shorthair” and Toybob “TBL- Longhair”. With such translation, the breed became registered in the IAF system (KLK "Iris", St. Petersburg), the ICU (UFC, the first club to work with this breed from "Belton", Ekaterinburg) and under the leadership of veterinarian surgeon Dr. Anna Gromova and Anastasia Nikolaeva. The Russian breeders’ decision to expand the breed color classes to include all range of colors classes was approved.

In 2014, Dr. Anna Gromova and a team of associate breeders requested the Toybob breed recognition in the largest Russian feline organizations. In May 2015, MFA (IFA) decided to approve the Toybob status to that of a recognized breed with the possibility of adjusting the standard, and in October 2015 the Toybobs got their first titles. The recognition for the Toybob in the ICU system (International Cat Union) was held in November 2015 and since January 2016, the Toybobs have been receiving their first championship titles as well. 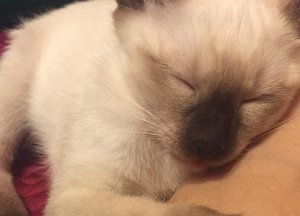 The toybob is known to be docile, making a great companion cat for the family. Because of their inherent playful attitude, they are also friendly with children and ready to play with them all day. Despite their small appearance, they are perfect for even large families and houses. These cats are very brave, and quite interestingly, the toybobs are not afraid of flash like most other breeds.

Toybos are completely obedient and unaggressive. They can get along well with other pets, especially if they like to play. Their incessant activeness even in adulthood would apparently seem to be like that of naughty little kittens.

Head: Rounded when viewed from the front, in the form of a broad wedge with rounded lines. Cheeks low and rounded

Muzzle: Short, broad, with developed whisker pads. Profile with a slight stop is not below the lower eyelid. The nose is broad, of medium length, slightly widening to a large convex mirror. The forehead is flat enough. Developed brow. The chin is strong.

Ears: From small to medium in size, set high and straight, open forward, quite wide at the base (ear height greater than the width at the bottom).

Tail: It consists of at least two or more kinked vertebras, twisted or bent and has an apparent length of 3-7 cm, movable.

Coat: In the shorthair, a dense, elastic, semi-adherent, well developed by spine. Overall hair soft, silky to the touch, on the back the hair is somewhat coarser than on the body, undercoat is poorly defined, feathering are also observed. The longhair variety is to have a semi longhair coat with similar texture and characteristics to the shorthair. 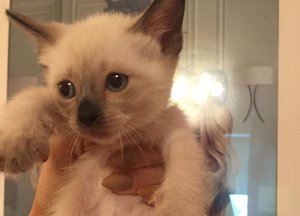